Recently, I visited New York City for the first time since I was six years old. Why did it take me 18 years to go back to the city that never sleeps, which is only a four-hour drive from my D.C. home? Honestly, it was so close that I kept putting it off, knowing that it would always be there. But I finally made the drive (well, ride on the Greyhound), and jam-packed everything I wanted to see into 9 hours!

So whether you are just passing through the city, or want to know the top places to hit, here is everything we did on our day trip:

My boyfriend Andres and I arrived in Grand Central Station, after taking a train in from Ossining, New York. While we were in the state of New York for a couple of days, we only had one day to spend in the city seeing everything we wanted to.

I was dying to get my hands on a New York bagel, so we grabbed one from Mendy’s Kosher Deli in the station topped with smoked salmon and “schmear” (10/10 would recommend). 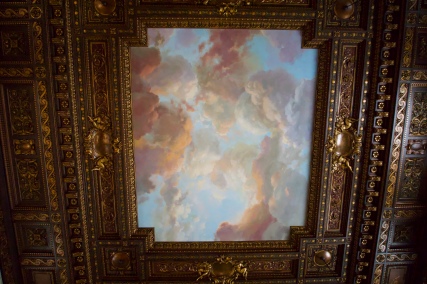 From Grand Central, Andres and I walked over to the New York Public Library, which was one of our favorite spots we visited. Andres and I are both admitted bibliophiles, and the stacks and stacks of bookshelves had us in awe. The library is its own museum of gorgeous architecture and art. We made our way through the different aisles, and could’ve perused them all day if we had the time.

We made our way to Central Park, but weren’t in a hurry, and there was so much to see as we walked down the bustling city streets. We admired the window displays of stores, listened to street performers, and even stopped in the famous Tiffany and Co. store from “Breakfast at Tiffany’s” (and felt wildly under dressed). When we got to Central Park, we walked a little ways down towards the zoo before walking alongside the park on our way to the Met. 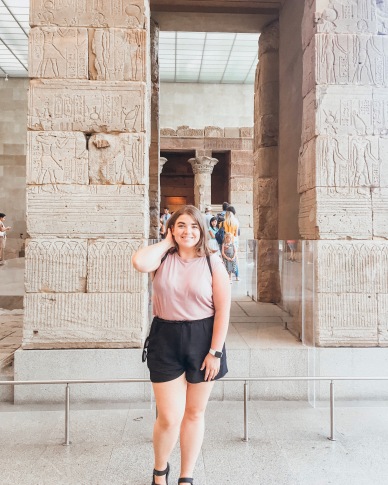 1:30pm: The Metropolitan Museum of Art

By the time we got to the Met, we were hungry for lunch. We grabbed some $2 slices of pizza and ate on the steps, and I pretended I was Blair Waldorf from Gossip Girl (see below for Andres being a great Instagram boyfriend). We made our way into the museum (pro-tip: admissions tickets are significantly cheaper with a student I.D., so make sure you bring one if you have it!) and looked at the massive map to choose which galleries we wanted to see.

Because the Met is so big, and we are lucky enough to live in D.C. where most museums are free, we picked and chose which things we’d only be able to see here. We visited the Arms and Armor gallery, which displayed knights in shining armor and samurai suits, as well as the Egyptian gallery (my personal favorite). As we navigated to the parts we wanted to see, we still managed to see quite a lot of paintings, sculptures, and art the Met had to offer.

If you know Andres and I, you know that our favorite show is “White Collar”, which was filmed in New York City. We really wanted to see the how where much of the show was filmed, so we took a 10-minute taxi ride to the Upper West Side to see the house (and give our feet a rest). Because the show isn’t wildly popular, we had the house to ourselves to take our tourist photos, and walked through the tree-lined neighborhoods.

While I was intimidated with taking the New York subway at first, we found it easy to navigate, and were lucky enough to always catch the right train and wait no more and four minutes for one (I thank our travel luck and experience with the D.C. Metro for that). From the Upper West Side, we took the subway all the way down the island to Ground Zero, where we observed the 9/11 Memorial.

The last time I had been to New York City was when I was six years old, and my parents and I had visited the top of one of the Twin Towers. I still remember standing at the top, looking at the view of New York City and the other tower next to us. The date was August 18, 2001. 24 days before the 9/11 terrorist attacks. It was a surreal experience to stand, 18 years later, next to the memorial of what was a building I stood on top of the last time I was here.

4:30pm: Back to Grand Central Station

We hopped on the subway once more and were back in Grand Central, starving for dinner. We grabbed a burger from Shake Shack, and oh my goodness it was exactly what we wanted. We ate our burgers in complete silence and in about five minutes. After we ate, we walked around Grand Central, admiring the architecture and people watching. You really do see all different kinds of people in Grand Central, from engagement shoots, to people dressed in tuxes and evening dresses, to street wear.

As we waited to board the train back to Ossining, we both agreed that we had had one of the best days, and were surprised that we did everything we wanted to do without feeling rushed or pressed for time. All in all, we saw 7 sites, walked 12 miles, ate some amazing food, and spent less than $100 total! I hope you enjoyed reading about our short but sweet New York City adventure, and share what else we should visit next time we’re in NYC in the comments below!